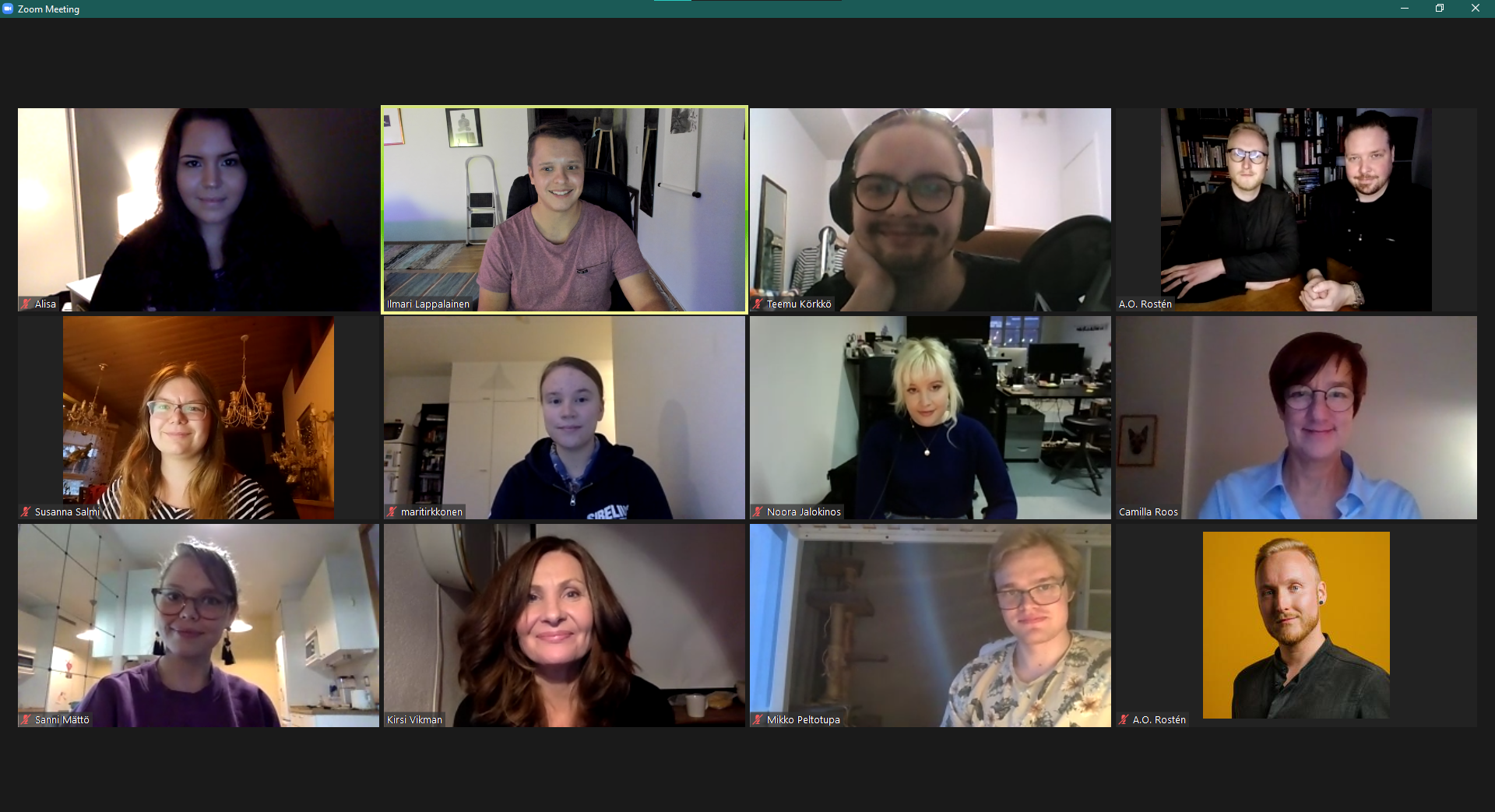 Northern Script 2020 is over! The competition was very tight but in the end the judges decided on two scripts to be awarded. Teemu Körkkö with the script The Dead of night got the honourable mention and the prize winner is… Alisa Korva with the script Out of Sight! Congrats to Alisa and Teemu!

All of the finalists, judges and hosts deserve a honourable mention so here they are all together. From the top row from left to right: Alisa Korva, Ilmari Lappalainen (producer), Teemu Körkkö, Artturi Rostén and Aku Salminen (workshop hosts), Susanna Salmi, Mari Tirkkonen, Noora Jalokinos, Camilla Roos (judge), Sanni Mättö, Kirsi Vikman (judge), Mikko Peltotupa (judge) and lastly Artturi Rostén again.
This was the first time that NoSi was organized online and the experience was very positive. Whether the final will be organized online next year again is yet to be decided, but this year has shown us that it’s very much possible to organize a fantastic workshop from the safety of your own home. The next few months will tell how the competition will move on!

The final workshop of Northern Script 2020 is moving online instead of being held in Oulu. With this move we want to ensure the safety of all competitors and equal chances of participation regardless of possible travel limitations.

We are motivated and confident in making a fantastic online workshop for the finalists. Thank you for your support!

Despite his short career and young age Artturi has done a lot in many places. He has successfully graduated from Juhana Herttua art, theatre and media based high school and from the Film & Television study program at the Arts Academy of Turku University of Applied Sciences as an editor and director. During his education and film studies Artturi was involved in 92 different AV-industry projects. After graduation the pace of productions and work haven’t slowed down.

Artturi works mainly as an editor for commercials, feature films and documentaries but has directed dozens of short films ( of which some have won awards at international festivals), several music video productions and three feature films. By commissioned work he has also slowly slipped in to the world of professional, almost daily screenwriting routine.

Artturi loves genre-content and is investing on the subject. He will be lecturing about horror film theory and dramaturgy at University of Turku fall 2020. At the moment he is working on a horror short with his team, writing a horror-drama screenplay for series and a crime feature with horror elements.

Aku Salminen is a screenwriter and artist from Turku, Finland. He has written screenplays and scripts for short films, TV-series, escape rooms and video games.

Aku and Artturi have collaborated in several projects, with success, and have a mutual understanding of project goals. 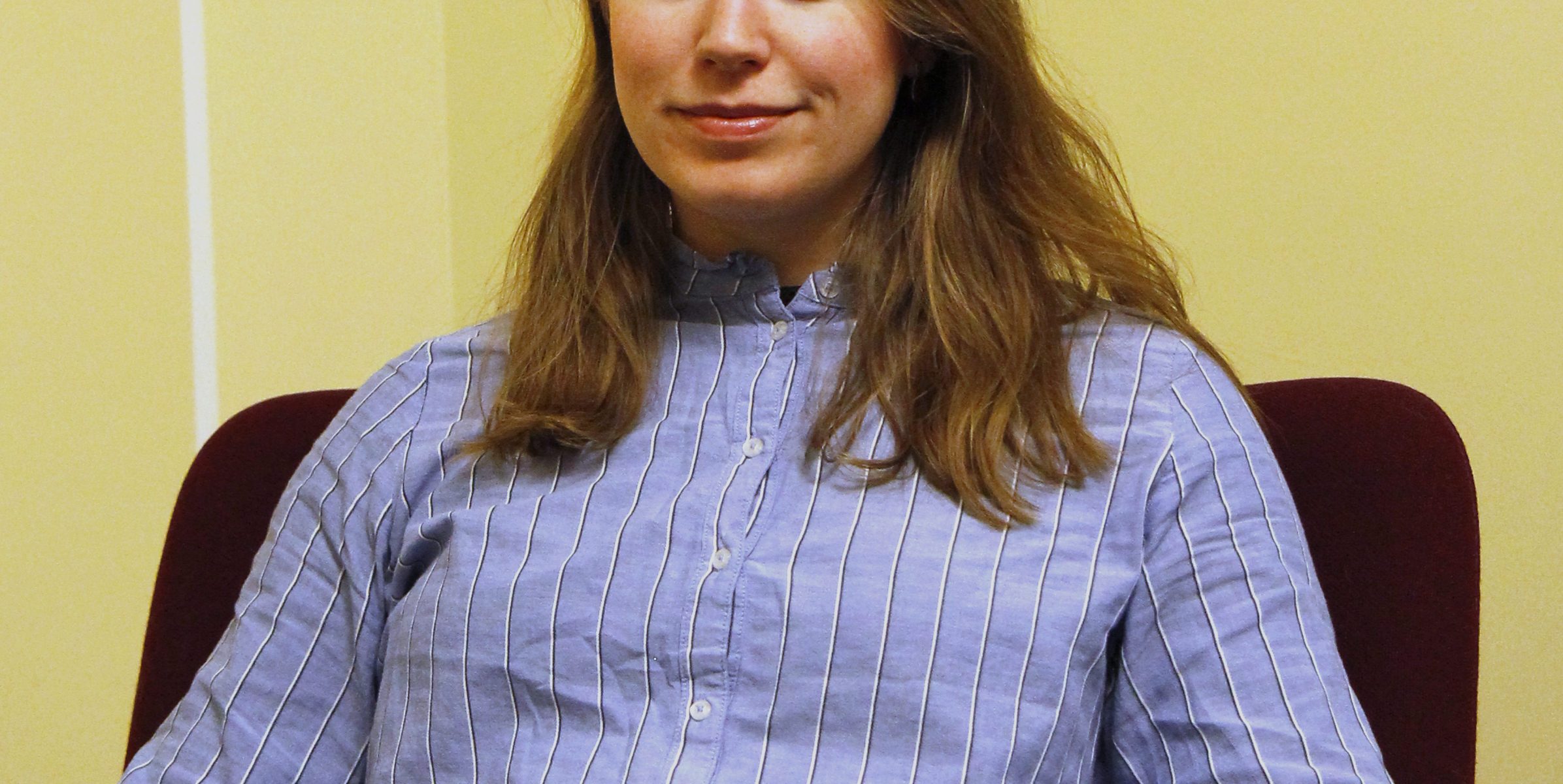 In November 2019 I took part of Northern Script in Oulu, Finland. The trip went beyond my expectations, as I in the end was announced as the winner of the script competition. Here are some words on my experience with Northern Script, before, during and after.

My story with Northern Script actually goes back to 2017, which was also the first year of the competition. As a young filmmaker in the North of Norway I was part of many Facebook groups regarding this, and I believe it was in one of those groups where info about the competition was first published. So, I wrote a script, back then, and I sent it. The script then was about a daughter visiting her isolated father in a mountain cabin, finding out her father had somewhat unorthodox extra-terrestrial hobbies, as well as a new girlfriend. But somehow, the script must have gone missing in the e-mail universe, and I never got a reply, and thus never got into the competition, and I was perhaps too shy to ask. Then, in 2018, I wanted to participate again, but simply couldn’t get the good idea down on paper, plus my final year of film studies, so there was enough to do. In retrospect, I see that it was a good thing that the script was lost in 2017, because if I had participated in the competition then, I would probably not have submitted this year, and then I would not have had any of the good experiences related to Northern Script, now and in the future.

But then came August 2019, I was done with my studies, didn’t have a job, and tried to live in a shared house in the fishing village of Henningsvær, not really knowing what to do. For some reason, I had forgotten that the competition existed, and when I suddenly remembered, there were only a couple of weeks to the deadline. So, when all my flatmates went to their jobs, unemployed/freelance me went to the café down the street to write. This time, the idea was quite clear in my head, and all I had to do was carve it out and refine it. The result of that became the script “Roskilde”, which derived from experiencing the festival of Roskilde in Denmark myself, just some weeks before. There I stepped into a universe on its own, with its own logic and expectations, and it was this that I tried to turn into writing.

A few weeks after submitting, I got the good news of becoming a participant in Northern Script 2019, and the good news that a trip to Finland was on the schedule. For me, writing and travelling are two of my main passions, so combining them is always a new dream coming true.

Refining my script as a part of the competition was also an interesting experience. Then I had not touched the script in two months, and when revisiting it, I saw both that it had its qualities, as well as details to be changed. Often, when writing I am so in the middle of it, which makes me both very critical and tired of the whole project, and I usually don’t manage to see the work with fresh eyes. Therefore, my tip to my future self when writing longer projects; let it rest a bit and see that is was not as bad as you thought, and that there is potential.

At last, the trip to Finland was at hand, a country I had never been to before. It coincided with the Oulu Youth Film Festival, which was very nice. I liked Oulu, with its lovely wooden buildings, mythical lake landscapes and surprising high levels of culture. The highlight was definitely going to Pehkolanlampi, the beautiful and big timber cabin in the woods. There we had salmon soup, and most important of all; the authentic Finnish Sauna experience. This was a wonderful experience, with all the nakedness and sweat you can imagine. It will take a long time to top this sauna experience, and I do sauna a lot.

At last, the award ceremony. There are few things that can beat the feeling of having your own name announced as the winner of a competition, any competition, but especially one within the field you wish to make your career. Winning the Northern Script is a good thing for several reasons. On a personal level, I get the confirmation and acknowledgement for my work, that I do need, even if I wish I didn’t. That someone, several people, see the potential of my work, that it has some quality and that I have something to contribute with, that is gold. A sheer confidence boost. On a more professional level, it is very valuable to be able to point to this, both that it is a very concrete thing that I have done, but also that it was noticed by other people. And this will become useful, when I inevitably will be in the situation where I have to apply for funds for my projects or apply for some sort of a job or grant.

So, my Northern Script Experience is over, for now, but it wont be long until I tap into it again. In June, I get to go to NUFF, the Nordic Youth Film Festival in Tromsø, which was the award. Perhaps the script will also travel on, I hope so, although I do not quite know how yet, as I am more into writing films than making them these days. I had a good time with the Northern Script, and I hope it continues and becomes more known than it is, because it is a very marvellous opportunity and I would not be without it.

Thank you, to Northern Script, to Oulu, to Pehkolanlampi, and to all the kind people I met in Finland.